High Park in Toronto is described in the respective post on http://www.redgannet.blogspot.com/
Grenadier Lake forms the western boundary of the park and is fed from a stream and storm water from the city of Toronto. It’s banks are thinly covered with reeds and rushes with a small reeded marsh at the top end. Other small ponds are formed from dams on a storm water stream running through the eastern part of the park.
I saw the first flight at 08.30. 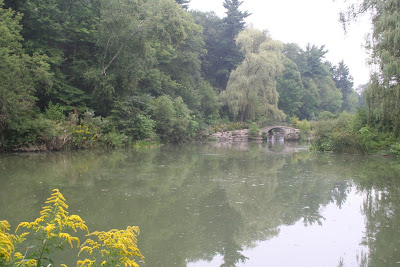 A pair of ponds in the northeast sector of the park should have been very productive at the right time of day, but I passed through too early. They would be worth a look when the sun is higher on my next visit. 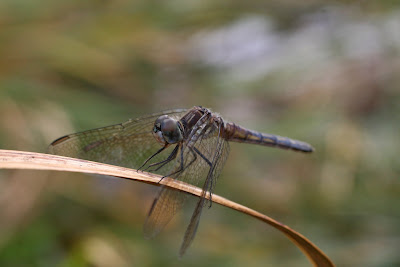 Grenadier Lake was teeming with Blue Dashers, which are fast becoming the most widespread odonata for this observer so far. 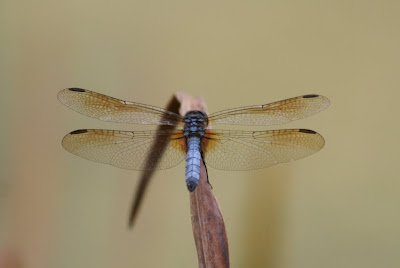 On this occasion, I saw that the wings were more shaded than I had previously noted. The specimens that I had observed in LAX, MIA and PHX had been much cleaner of wing.
This caused me to look more carefully and I saw amongst the shaded wings, some clearer ones. 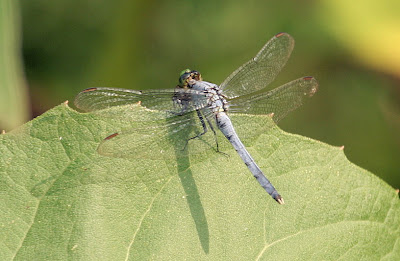 These belonged to the Eastern Meadowhawk.
Away from the lake are some streams and damp meadows. 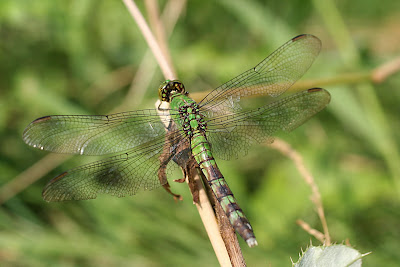 Here I met the female Eastern Meadowhawk. Thinking I had a new species, I was determined to get a good photo and she proved to be very obliging. She had caught and was eating a small, blue fly It was at this point that I checked my “remaining frames” counter and saw that it had hardly changed. I had set the definition very low last week and had not changed it back. All of the pictures taken this week have been at 1mb or less. Changing the resolution back to high, the pictures were over 4mb. 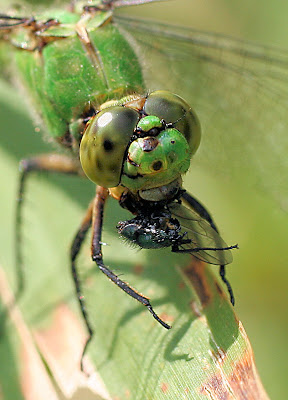 The definition is compromised when put onto the blog, so the difference would only be obvious when the subject is heavily cropped, but it is very noticeable on the monitor with the full size picture. 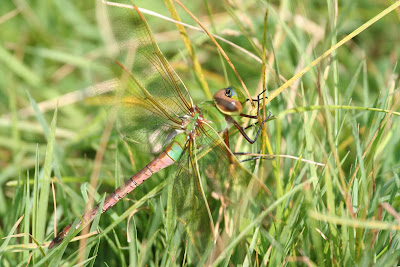 A Green Darner settled into the grass for a close-up. A saddlebags flew over in silhouette but I am not yet proficient enough to tell which.
At the southern end of the park, a storm water pond overflows a weir and ends up in lake Ontario. Here, were hundreds of odonata. 12-spotted Skimmers, Green darners, Eastern Meadowhawks and Blue Dashers. The zygoptera were too far away on the whole to get a good look at. 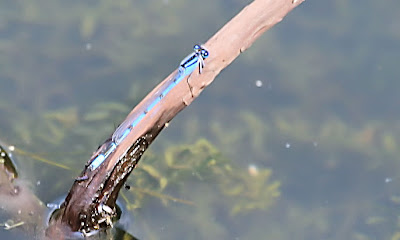 This one could be a Familiar Bluet, but I am going to need more practice identifying before I claim him in red.
ps. when in Toronto, visit the Open Air Book and Map Shop. It is a basement shop down some stairs at the corner of Toronto and Adelaide. It is exactly what it claims to be and even with agoraphilia like mine, I find it a pleasure to spend hours inside. Bird books and mammal encyclopaedia, insects, travel. There are no books about cooking or teen idols, no magazines about overexposed celebrities, just outdoor books and maps.
Posted by Redgannet at 14:51