In Feb 1942, Singapore fell to the Japanese. If the Allied forces had not eventually turned the tables, I would be falling on my sword about now. This is the rewritten post, replacing the mistake riddled previous effort.
My thanks go to Mr Ian Rocoto from http://odonata-malaysia.blogspot.com/ for his guiding hand and experienced eye.
Thanks also to Steve Covey who writes http://wiltshire-dragonfly-news.blogspot.com/ for the common name for Ceriagrion cerinorubellum

Singapore Botanic Gardens have some great habitat for dragonflies and in the limited time between the birding and before the onset of rain, I indulged myself. 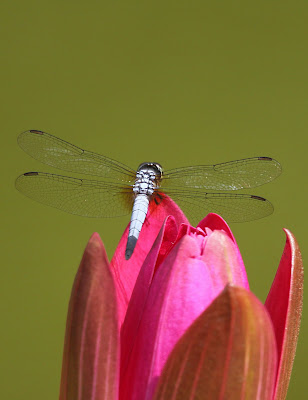 There is a post on http://www.redgannet.blogspot.com/ if you need the logistics, or if you want to check out the birdies.
I found some old favourites as well as some new ones.Identification is still taking time. I am used to field guides for birds which are detailed in the extreme. The guides for odonata simply do not cut the mustard in comparison. 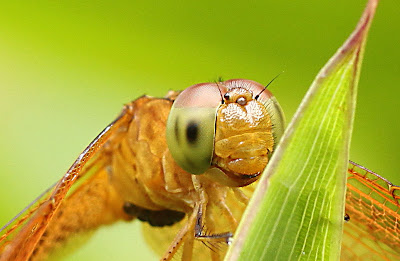 Like birds, damselflies and dragonflies have sexual differences and age characteristics with regional variations too, not forgetting the larval stage. Most guides in this field show the male only with sketchy detail for differentiating between similar species. Websites are proving to be my best source of information, but they are limited by mostly being photographic, which cannot compete with detailed drawings that accentuate characteristics. I am currently working with my guide to Hong Kong, but managed to augment that with a small volume from the gardens gift shop.
Just inside the gate on Napier Road is the Marsh Garden. It is a small, shallow, still body of water with some emergent water plants and some weed. Around it are decorative plantings. At 07.00 when the sun began to rise, there were odonata already in position, waiting. The temperature only dropped to 28C last night so they should not take long to warm up. 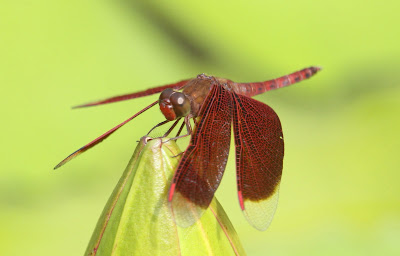 Without an adequate guide, I took the first odes to be Russet Perchers, Neurothemis fulvia. Actually, they were Neurothemis fluctuans. I could not find a common name for them. 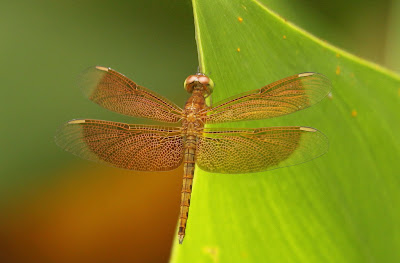 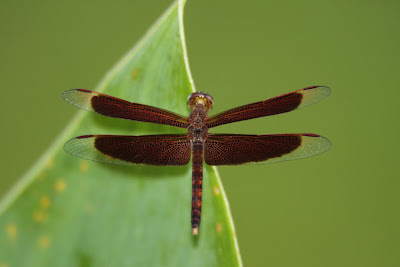 Neurothemis fluctuans, male
In an area given over to formal brick-built ponds with water lilies, some damselflies were stirring. 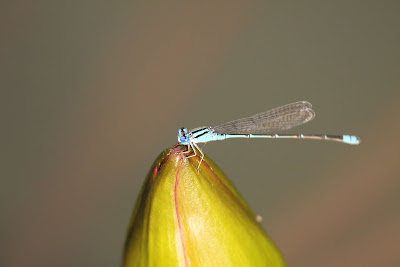 On an unopened flower bud was a Pseudagrion microcephalum and on some floating lily leaves was an Common Bluetail, Ischnura senegalensis. 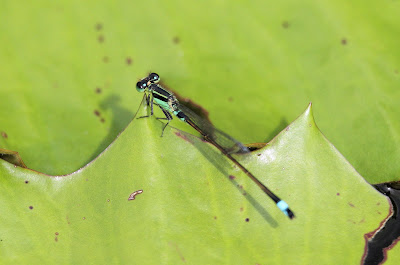 I planned to return there later in the day to see if any would pose on an open flower. 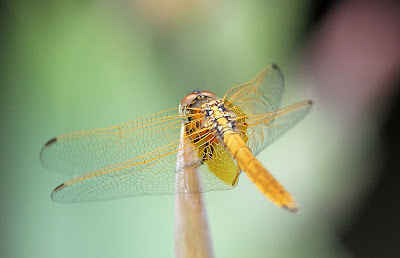 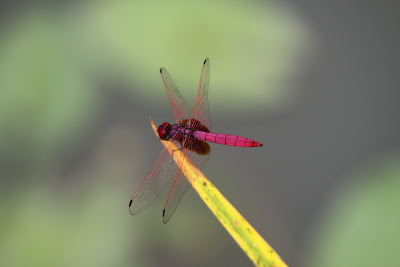 On Symphony Lake, the most obvious dragonflies were the Crimson Dropwing, Trithemis aurora. 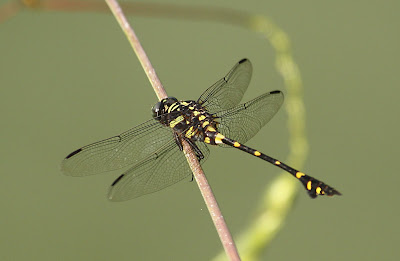 An Ictinogomphus decoratus, sat way out over the water on a horse-tail rush.
By the time I returned to the brick ponds, the Crimson Dropwings had arrived. They seemed to prefer the brick edges of the ponds as perches. On the lake, they had been using bank-side vegetation to sit out. 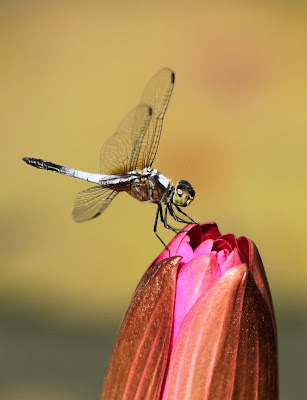 As I had hoped, there were some Blue Dashers, Brachydiplex chalybea, perched on the open lilies making a beautiful picture.
I had promised myself a second look at the Marsh Garden before the rain set in. I was distracted on the way there by a male Rhodothemis rufa. 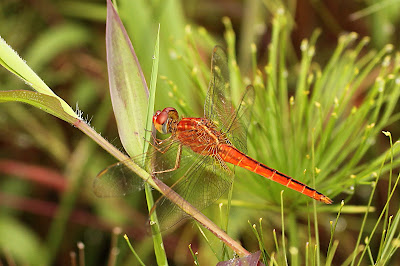 I only had a very short time left, but managed a quick look at a medium-sized libellullid. 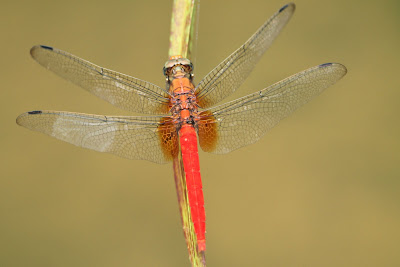 I have named him Orthetrum testaceum, on advice from Ian. If I had known, I would have been looking for a tuft of setae on S2.
The other problem with odonata field guides is that they are usually incomplete. How can I definitively make an identification when I do not have the complete set to make a proper comparison?

I made a second visit to the gardens the next morning and spent most of my time in the Marsh Garden, but also managed to get to the Eco Pond 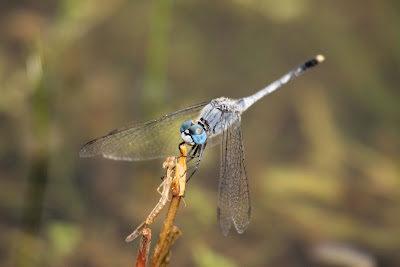 which accounted for the Blue Percher, Diplacodes trivialis and the Green Skimmer, Orthetrum Sabina.
I had not impressed myself with my photography on the first day and wanted to return to see if I could do better. 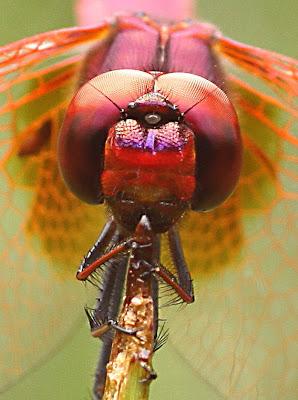 I found that for macro photography like this and when using the big lens at full throttle, locking the mirror up avoids the vibrations that have been plaguing me up ‘til now.
In the Marsh Garden, to my delight, I found a couple of new zygoptera. 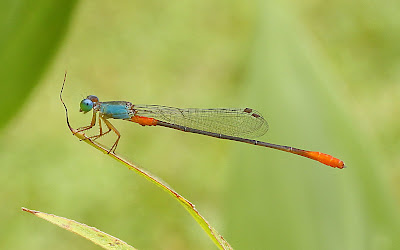 The first was Ceriagrion cerinorubellum. What a shame that such a beauty does not have a common name. Stop press. A comment comes from Steve Covey of http://wiltshire-dragonfly-news.blogspot.com/ the common name is Orange-tailed Marsh Dart 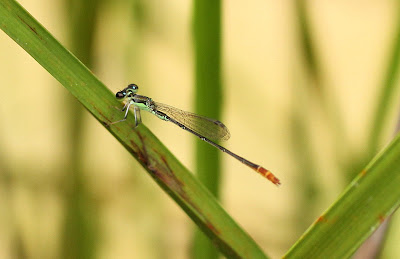 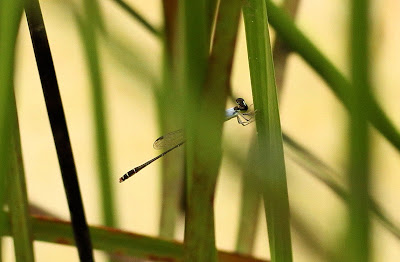 A mature male and young male of this species were chasing each other through the bank-side rushes.
I warmed to the task of photographing the myriads of Neurothemis, still under the misapprehension that they were the fulvia sp. Only when I managed to find “A pocket guide Dragonflies of Peninsular Malaysia and Singapore” by A.G. Orr, did I notice that there were more Neurothemi than I had realised. By now it was raining and I had to return home that evening, so I am now poring over the photos trying to get good ID. I needed someone better aquainted with Singaporean odonata than I am to confirm their identities. To that end Ian Rocoto kindly perused the post and made suggestions that I am pleased to adopt.