The logistics of getting to and a description of Sultanpur Lake are given in the respective post on http://www.redgannet.blogspot.com/
I have brought a new camera with me today. The Canon 50D arrived just an hour before I left for the airport, giving me just enough time to get some steam into the battery.
With 15.1 million pixels, I was looking forward to some superfine detail and got my first chance to try it out as soon as I walked through the gate. 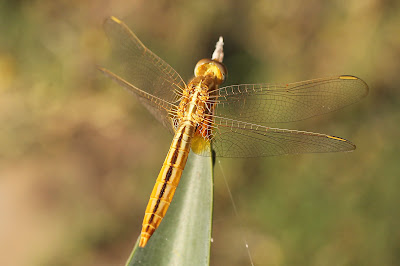 A dragonfly was perched on an aloe-type plant. I suspect it was a female or juvenile of the darker, redder ode below. 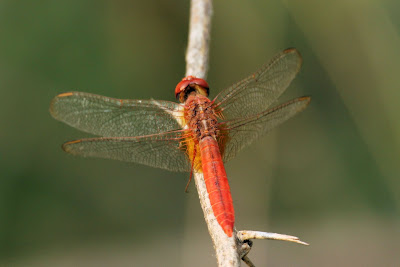 They both exhibit similar blotches at the bases of the wings. 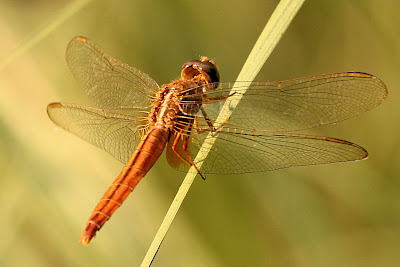 This particular species was very common in this locale with hundreds of them in the meadows and the wet margins of the lake. It is very reminiscent of a Crimson Darter, Cocothemis servilia, but I have nothing else to compare it to. It is duller than previous encounters with C.s. 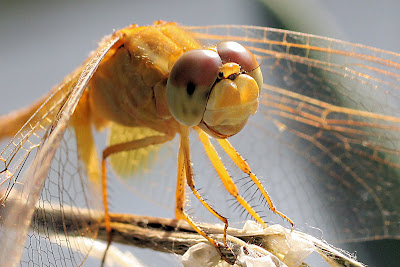 I had ordered a book that I hoped would enable me to identify some of the common odonata of India. It arrived while I was away, but on opening it on my return, I found it to be quite useless. The illustrations were childlike and photos were poorly printed. So I find myself throwing the identifications open to anyone who can help.
The second dragonfly was seen in long dry grass away from the lake and was seen only once. 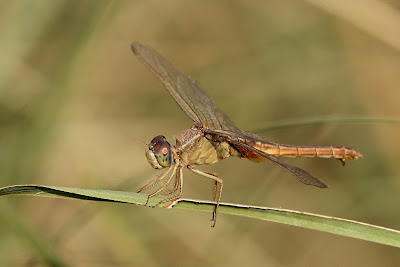 In terms of quantity it was dramatically outnumbered by all the others today.
At the lakeside, I saw a familiar face. It was the Green Skimmer which has previously featured in Redgannet’s bird blog (before the schism) in posts from Singapore and Hong Kong. 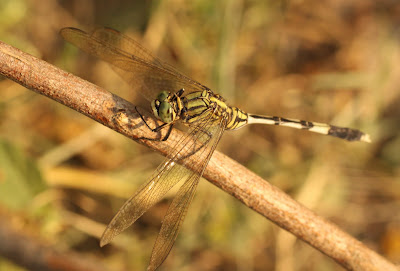 It is a very widespread dragonfly that is distributed from Europe to Australia and all points between, taking in Russia and North Africa on the way. 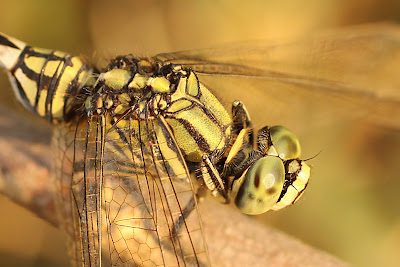 The skimmer was very approachable and allowed me to get close to him with the 50mm macro lens.
Seen away from the water as well as in the margins of the lake was a Pied Percher. This is another ode that is crossing the divide from the bird blog after first appearing in the Hong Kong Post. The photos were taken in deep shadow and the white markings between the black markings and the wingtips did not show up well. 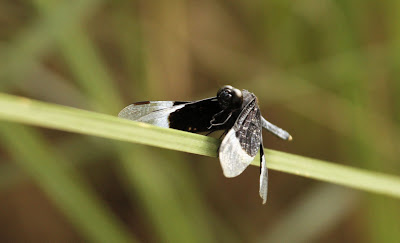 A similar-looking dark dragonfly could be related. It’s general appearance seems very close to the percher’s, but we all know how similar some other forms of odonata are, so I am not taking anything for granted. 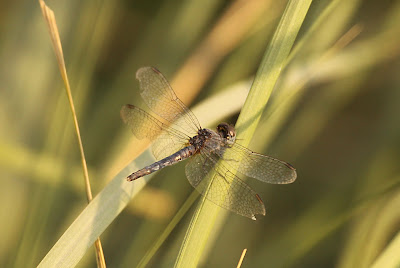 Both of them seemed to be weak fliers, resting after short forays.

High excitement about the camera inevitably led to disappointment. It is still me behind the lens after all and I continue to make the same mistakes and get too greedy with zoom versus exposure. I do like the 50D however.
The 15.1 megapixels are a big step up from the 6mps of the 350D. The 6.3 frames per sec. worried me slightly and I predicted endless amounts of deleting pictures that I didn’t like. Will it make me more choosy about the pictures I take or will I continue working on the principle that if I take hundreds of shots, one of them must surely be OK? I wonder.

The memory fills up quickly. Using the superfine quality with RAW too, burns 20mbs for each shot. A 2 second burst would be quarter of a gigabyte. There is a low speed autowind at about 3 frames per sec which will save on memory and deleting.
The processing time once downloaded onto the computer is a drag too. But the choice has been made between high optical zoom and better cropping ability and the price is memory and processing time as opposed to bulky lenses and shaky shots.
The camera itself is big in the hand, but easy to use. Best of all the settings are easily accessible and obvious in format.
The battery lasted reasonably well. It took 400 pictures and allowed me to view them all a couple of times afterwards.
I made a couple of foolish errors during the day. In Servo AF, it is able to find focus and predict movement of moving objects. Focus locking and recomposing in this mode does not work and I found myself with a lot of blurry shots.
The Auto White Balance mode did not pick up the changing conditions from bright sun to shade very well, nor from outdoors to indoors. I may have to set WB manually in future.

Posted by Redgannet at 05:11 No comments: